Win Every Argument: The Art of Debating, Persuading, and Public Speaking (Hardcover) 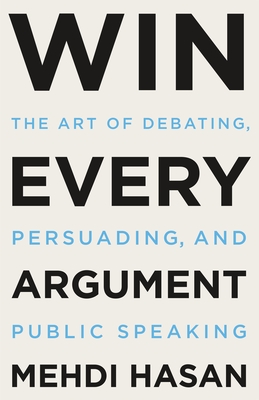 Win Every Argument shows how anyone can communicate with confidence, rise above the tit for tats on social media, and triumph in a successful and productive debate in the real world.

MSNBC’s Mehdi Hasan isn’t one to avoid arguments. He relishes them as the lifeblood of democracy and the only surefire way to establish the truth. Arguments help us solve problems, uncover new ideas we might not have considered, and nudge our disagreements toward mutual understanding. A good argument, made in good faith, has intrinsic value—and can also simply be fun.

Arguments are everywhere—and especially given the fierce debates we’re all embroiled in today, everyone wants to win. In this riveting guide to the art of argument and rhetoric, Hasan shows you how. As a journalist, anchor, and interviewer who has clashed with politicians, generals, spy chiefs, and celebrities from across the world, Hasan reveals his tricks of the trade for the first time.

Whether you are making a presentation at work or debating current political issues with a friend, Mehdi Hasan will teach you how to sharpen your speaking skills to make the winning case.

Mehdi Hasan is an award-winning British-American journalist. He is the host of The Mehdi Hasan Show on MSNBC and NBC’s streaming channel Peacock. Hasan is a former columnist and podcaster at The Intercept and a former presenter on Al Jazeera English, and his op-eds have also appeared in the New York Times and the Washington Post.

“I refused to write this blurb for Mehdi Hasan. He won that argument! Now I am doing it. That’s how good he is at arguing! I better start reading, quick.”
—Judd Apatow, Emmy Award-winning writer and director

“Mehdi Hasan’s book is a masterpiece of rhetorical argument and effective persuasion! From Demosthenes to Churchill, Cicero to Martin Luther King, Hasan lays bare the essential elements of how to delight, instruct, and move an audience. His erudition is as impressive as his wit. And his moral passion is as authentic as his love of words and life.”
—Cornel West, Dietrich Bonhoeffer Chair at Union Theological Seminary

“I've seen Mehdi win every argument he’s entered since we were at school. This is a masterclass from one of the most formidable debaters and interviewers of our time.”
—Riz Ahmed, Oscar-winning actor and musician

“Mehdi was one of the toughest interviews I did in the White House. In this book, he takes us on a journey through his own experience over years as a journalist and through compelling examples from history to capture the thrill of winning arguments. His book includes the kind of specific advice and applicable tactics that will make readers want to finish the book and immediately go find a sparring partner.”
—Jen Psaki, former White House Press Secretary

“Mehdi is a generationally talented interviewer. He has mastered his craft, and in this book, he generously spills his secrets.”
—Jonathan Swan, Emmy Award-winning National Political Reporter at Axios

“Win Every Argument is hugely entertaining, deeply knowledgeable, and filled with illuminating tips and stories from Mehdi Hasan’s life of debating, interviewing and advocating for his beliefs. Read this book to find your own voice while learning both the art and history of persuasion.”
—Ben Rhodes, author of After the Fall

“Inside our digital echo chambers, it is far too easy to forgo persuasion in favor of performance. Yet Hasan reminds us that we will never change the world unless we change people’s minds. An indispensable handbook for our high-stakes and polarized times.”
—Naomi Klein, author of The Shock Doctrine